The electricity crisis that’s wreaking havoc on the Chinese economy is at risk of worsening this winter if freezing weather exacerbates surging power demand and soaring fuel prices.

The chance of a La Nina — a weather pattern that usually brings colder-than-normal temperatures to the Northern Hemisphere — is looking more likely, which would further stretch already tight energy supplies. There’s a 70% to 80% chance of a La Nina over the winter of 2021/22, the U.S. National Weather Service said earlier this month.

That forecast will be weighing on the minds of officials in Beijing, who will be keen to avert blackouts as cooler temperatures put more strain on grids. At least 20 provinces and regions making up more than two-thirds of China’s gross domestic product have announced some form of power cuts, prompting banks from Goldman Sachs Group Inc. to Nomura Holdings Inc. to issue warnings over growth and sparking concerns over supply chain snarl-ups. 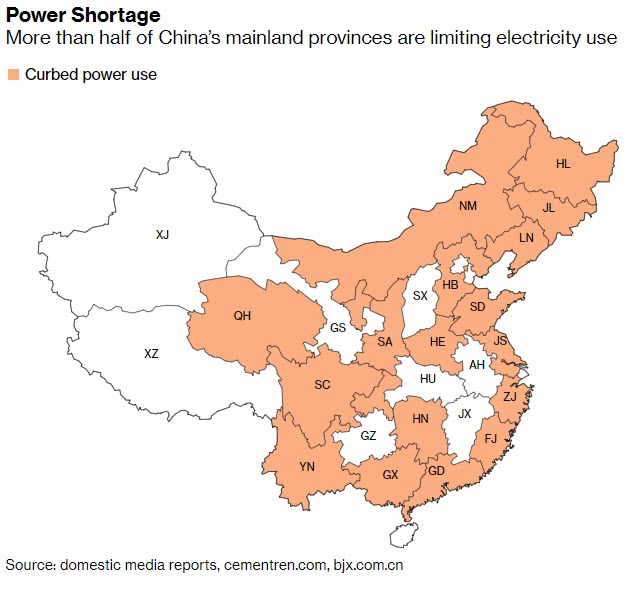 China’s power consumption is already surging to meet the demands of the global economic recovery, and is now poised to increase further in the run-up to the peak winter season. It was around 16% higher this year through July than the same period in 2020, when frigid temperatures and soaring export orders also caused power shortages in parts of the country, according to figures from the China Electricity Council.

Chinese policy makers would essentially have three options — or some combination thereof — if the freezing weather comes to pass. They could let electricity companies raise rates, which would allow more coal burning but also result in accelerating inflation; they could accept lower levels of economic growth; or they could try to super-charge coal production, risking international scrutiny with the COP26 climate summit only weeks away.

That might be easier said than done. Coal still accounts for more than two-thirds of China’s electricity, but President Xi Jinping’s decade-long push to manage capacity has limited the development of new mines, while a safety campaign this year following a spate of deadly accidents has suppressed output from existing ones. Though production of the fuel rose 6% in the first eight months of the year, output from coal-fired plants surged 14%, leading to a decline in inventories.

The winter peak season for energy consumption is approaching and if temperatures are colder than normal that may further aggravate shortages and increase the pressure on coal supply, Guo Chaohui, chief commodities analyst at China International Capital Corp., said in a note this week.

In the short term, there may be some respite as power demand eases after several provinces ordered factories to shut in order to meet energy-intensity targets. And the so-called Golden Week holidays that run from Oct. 1 to 7 typically see a big reduction in industrial activity. 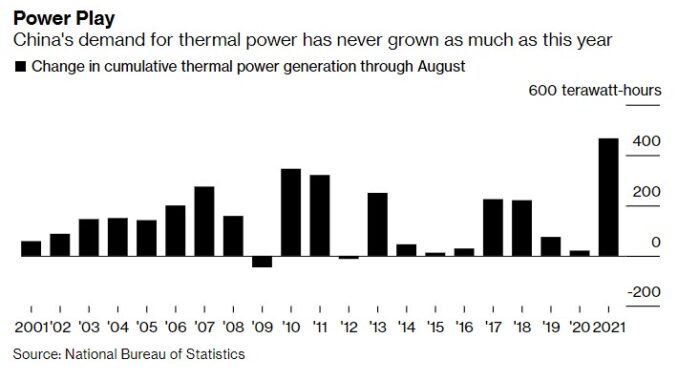 The fact that most Chinese power plants sell electricity at regulated rates has led to some generators deciding to cut output instead of producing power at a loss, worsening the current crisis. One way to resolve that would be to let them raise power prices, and this year electricity rates have been allowed to float mildly beyond the price ceiling in some regions.

The increases would need to be fairly steep. Generators would have to hike tariffs by around a third to break even, according to calculations by Bloomberg Intelligence. And Beijing has also typically been hesitant to let power prices rise for fear of hurting the competitiveness of its manufacturing industry.

Still, the severity of the crisis this winter could force Beijing’s hand, according to Hanyang Wei, an analyst at BloombergNEF. “This round of crunch could push the government to open up more upside space for coal power prices,” he said.

China’s oil consumption could peak in five years at a daily level of around 16 million barrels, a senior Sinopec executive has forecast, as quoted by Reuters. Ma Yongsheng, acting chairman of the state oil major, also […]

Energy News Beat Publishers Note: The new China – Iran oil deal will also impact supply outside the OPEC and OPEC + quotas.  As OPEC and its allies prepare for another decision on oil output, […]

Founded by William Li, Nio is just a six year old electric car company. Its parallels of success with Tesla are uncanny. With a passionate customer base, a quirky personality of the founder, and a skyrocketing market share, Nio is […]