The company is buying Moda Midstream Operating LLC for $3 billion in cash from EnCap Flatrock Midstream, Enbridge said Tuesday in a statement. Enbridge’s stock price rose as much as 50 cents to C$50.62 in Toronto, the highest since March 2020, before erasing gains.

The deal marks a shift in focus toward the U.S. market for Enbridge as it wraps up construction of the Line 3 oil sands export line after years of regulatory and legal battles to build the project. The company, which already handles about a quarter of all crude produced in North America, is betting on a strong outlook for exports of oil pumped from the Permian and Eagle Ford shale basins in Texas.

The fracking revolution has not only revived U.S. oil production over the past decade, it has turned the country into one of the largest shippers of the commodity. The deal includes Ingleside Energy Center, near Corpus Christi, Texas. Built in 2018, it’s North America’s largest crude export terminal, which loaded 25% of all U.S. Gulf Coast crude exports last year. 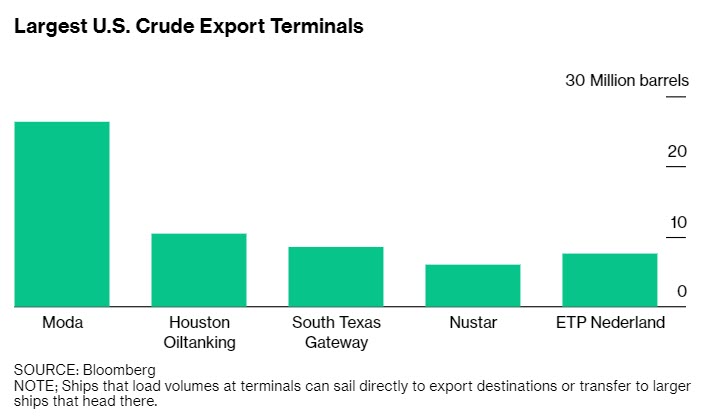 Enbridge will also acquire a 20% stake the Cactus II Pipeline, which connects the Permian with the Gulf Coast, plus the Viola pipeline and the Taft Terminal.

Enbridge seeks to increase its dividend and cash flow, and the Moda Midstream acquisition is a quick way to advance that strategy at a low price, Matthew Taylor, an analyst at Tudor Pickering & Holt, said by phone. Still, some investors would have wanted the company to pay down debt or invest in core assets instead, he said.

“I think the spreadsheet math makes a lot of sense but it’s not what investors were looking for at this time,” he said. Shareholders “want to see growth and returns but in a way that reduces emissions intensity and attracts new investors.”

Enbridge said the acquisition will be initially funded with current liquidity, and that the deal — which is expected to close in the fourth quarter — will immediately add to earnings.

Barclays Plc is Enbridge’s financial adviser on the deal. Sidley Austin LLP is the company’s legal counsel in its purchase agreement with Encap Flatrock Midstream to acquire Moda Midstream. — With assistance by Sheela Tobben

Enbridge federal court case receives broad support from government, business and labour from Michigan, Canada, and throughout the region

CALGARY, AB and LANSING – The Government of Canada and entities representing hundreds of thousands of businesses and workers from across the Great Lakes region in the United States and Canada demonstrated support for Enbridge’s case in federal court over the Line 5 […]

Enbridge Inc.’s push into new frontiers of the energy transition such as carbon capture and clean hydrogen production could use Canadian tax credits similar to those in the U.S., the company’s CEO said. North America’s […]

Months after President Joe Biden snubbed Canadian officials by canceling Keystone XL, an impending showdown over a second crude oil pipeline threatens to further strain ties between the two neighbors that were frayed during the […]

We use cookies to ensure that we give you the best experience on our website. If you continue to use this site we will assume that you are happy with it.Ok