The European electricity market is in crisis as a perfect storm is driving up prices to ever greater heights. The timing couldn’t have been worse as countries across the continent are reopening and energy demand is rising. Most signs point towards the likely continuation of the current situation while there is a chance that things could get worse. There is an opportunity to balance the electricity market towards ‘normal prices’, but that means geopolitical concessions which not everyone is willing to make. 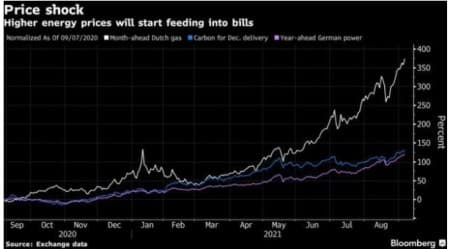 Rising costs are a consequence of bad luck when it comes to the weather, geopolitical developments, and ambitious decarbonization policies. According to Julien Hoarau, head of EnergyScan, the analytics unit of French utility Engie, “the problem hasn’t even started yet. Europe will face a very tight winter.”

Unusually cold weather during the last heating season increased demand for natural gas that is supplied by domestic production, imports, and underground gas storage. Under normal circumstances, these storages are filled in the summer period when demand is low and prices favorable. This year’s buying season is interrupted as there is less natural gas on the market. As usual, East Asia is willing to pay a premium that draws LNG cargoes to the Far East. Russia, on the other hand, doesn’t seem to be willing to fill the gap this time.

Furthermore, Scandinavia’s electricity export capacity is drastically less than usual as drought has hit the region this summer. Several submerged cables connect hydropower-rich countries such as Norway and Sweden with the Netherlands, Denmark, and Germany. However, water levels are unusually low, meaning there is less cheap electricity to export to the south.

Also, the industrialized northwest of Europe is less windy in the summer which is the main green source of electricity in this region of the continent. Solar plays a marginal role in the north compared to the south. Therefore, Europe has relied on traditional thermal sources: coal and natural gas. 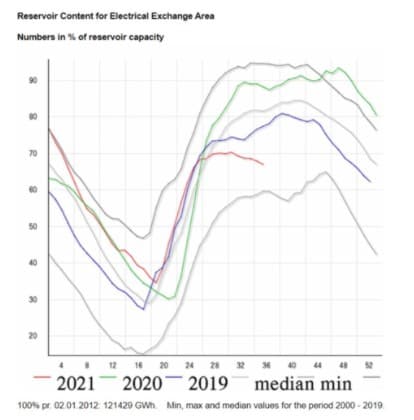 Demand for coal has increased dramatically which has raised prices by 70 percent this year. Besides higher demand, the costs for carbon emission certificates have further increased the financial pressure. Speculators and higher demand are the main driving factors behind the record ETS prices. Coal, which emits twice the amount of CO2 compared to natural gas, has a higher need for these certificates.

The most interesting part, arguably, of the growing electricity bill on the continent, is the lack of sufficient volumes of natural gas. European production has been decreasing steadily over the years due to technical and political reasons. Europe’s single largest gas field in the north of the Netherlands is being closed after residents successfully lobbied for closure due to extraction-induced tremors in the production area. The most obvious solution would be more imports, but both LNG and piped natural gas exporters have failed to meet demand.

Of these exporters, Gazprom has the best cards to dramatically increase its sales in Europe. But so far, the Russian company has shown reluctance to meet demand. Although there are more companies active on the European market, none has the production and transport capacity to act as a swing producer such as Gazprom. The Russians, however, haven’t booked additional transit capacity through Ukraine’s pipeline system except to supply customers under regular contractual obligations.

Gazprom, meanwhile, has completed the controversial Nord Stream 2 pipeline (NS2) that will double its direct export capacity to Europe’s largest importer and consumer of natural gas: Germany. Some analysts explain Moscow’s reluctance to send more gas as a method to pressure the EU on green-lighting NS2. The quick approval and certification could enable the flow of gas before the end of the year. Regardless of Gazprom’s need of finishing the pipeline, the company seems comfortable with high prices.

For years, the company’s main goal was to increase its market share. Gazprom has changed track and strives for higher profits instead. The current situation can be seen as compensation for last year’s dramatic losses when the world economy ground to a halt.

There is no quick fix to the current situation. European customers, therefore, hope the winter will be mild and favorable windy conditions mitigate rising costs this year. When it comes to NS2, however, there is no easy solution. The current situation is a wake-up call for the European establishment which urgently needs to rethink how the continent’s energy security can be improved. Climate change is increasing the number of days with extreme weather conditions. This means that large price fluctuations could happen more often as the energy system increasingly becomes dependent on the weather.

Russian energy giant Gazprom expects domestic gas consumption to rise by 7.5% within the next five years as it embarks on a $7 billion programme to supply gas to more households, a company official said […]

Energy News Beat Publishers Note: Germany has been at the forefront of the energy migration to renewables. That being said, Germany has now become more dependent on natural gas to support the large renewable infrastructure. […]

Gazprom PJSC increased its 2021 price guidance for natural gas exports, while signaling caution on volumes it could ship, as Europe’s energy crisis worsens. The Russian gas giant, Europe’s biggest supplier of the fuel, reiterated that […]