With its chimneys towering 200 meters above the industrial heartland of England, West Burton A power station is a relic of the fossil fuel age. When fired up, its boilers burn thousands of tonnes of coal each day, spewing out the carbon dioxide that’s warming up the planet.

After more than 50 years of operation, it will close next year, part of a global transition into green energy sources like wind and solar. It’s only rarely used, but for several days in September, it was this old, polluting facility that kept the lights on in the U.K.

West Burton isn’t an oddity. Across the world, fossil fuels are making a remarkable comeback as a super-charged recovery from the pandemic boosts demand. For all the green energy promises and plans, that transition is in its infancy, and the world still leans heavily on fossils. It’s an addiction built up over two and a half centuries, and it runs deep.

In Europe, where electric vehicles are becoming ever more popular, gasoline sales are booming, reaching a 10-year high in some countries. In the developing world, from Brazil to China, natural gas consumption is stronger than ever. The global hunger for energy has collided with constrained supply, itself the result of a tangle of factors, sending power prices surging in many countries.

Adding it all up, fossil fuel demand is already flirting with pre-pandemic levels, which means emissions are on the rise too. On current trends, the combined consumption of coal, natural gas and oil is likely to hit an all-time high by mid-2022.

“This is the revenge of the fossil fuels,” said Thierry Bros, an energy expert and professor at Sciences Po in Paris.

The situation points to a daunting new phase for the energy transition, with growing tensions among the disparate policy objectives of simultaneously reducing emissions, keeping prices low, and guaranteeing security of supply. The pace of the effort could even be at risk if soaring prices dent public support for climate policies.

It’s a dark backdrop just days ahead of the start of a United Nations summit in Glasgow, COP26, which many believe is the last opportunity to avert catastrophic climate change.

“The climate crisis is real, and energy transition is a necessity, and we must accelerate it — but it’s not a flick of a switch,” said Amos Hochstein, U.S.’s top energy diplomat.  “If we want to solve climate change we need to do so while at the same time insulating the global economy from extreme energy shocks.”

Governments can’t ignore the price squeeze, and many have stepped in to cushion the impact with subsidies and tax cuts. But with constant warnings about irreparable damage to the planet, few see officials rolling back from their emissions commitments.

More than 70% of people around the world are worried that climate change will harm them personally at some point, according to the Pew Research Center. The figure is lower in the U.S., though still at 60%. In Germany, the Green party just had its best ever result in an election, and is likely to form part of the next government. 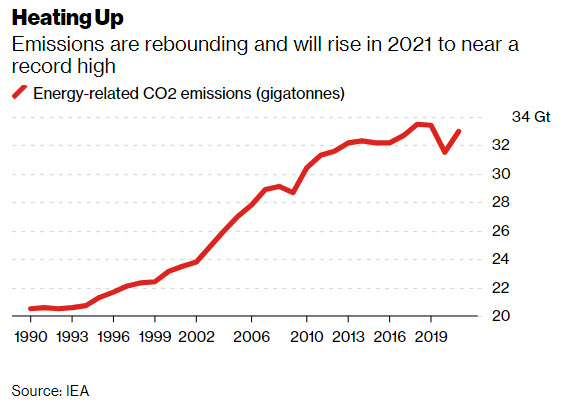 For several years, the world has grown complacent about fossil fuel consumption. From oil to coal, peak demand has been the buzzword, always about to happen, but never actually materializing. Then many assumed that some of the drop in consumption during the pandemic was structural, driven by social changes like work-from-home and the hope of a greener recovery.

But outside jet-fuel, still hamstrung by travel restrictions, oil demand is today higher than it was in 2019. The car has returned to city centers as people avoid public transport. Many countries are desperate for gas as it’s become the swing fuel that offsets the ups-and-downs of solar and wind in electricity generation. Coal is on the up too, even if the medium-term outlook for the dirtiest fossil fuels remains decidedly somber.

Under the short-term cyclical factors — the super-fast rebound and supply constraints — a bigger longer-trend is also shaping the market. As governments work to reduce emissions, investors are pulling out of dirty businesses, and companies are cutting spending and closing facilities. With cleaner energies not fully ready to take up the slack, that’s created an imbalance, as well as volatile prices.

“We’re at a fairly critical junction,” said Russell Hardy, the head of Vitol Group, the world’s largest independent oil trader. “The hydrocarbon industry is going to suffer a bit of under-investment as we go forward as people focus their capital on greener projects.’’

The market is already flashing red. The cost of coal has surged above $200 a tonne, surpassing the 2008 peak during the last commodity boom, and natural gas in Europe and Asia is at an all time high. U.K. benchmark electricity prices last month surged at one point to more than 400 pounds per megawatt hour, about 10 times normal, prompting West Burton A to come into action.

The demand surge has challenged many assumptions about how quickly the world would decabornize. Faced with an energy crisis, many consuming nations zoned in on older fuels. The White House urged the OPEC cartel to increase oil production fast, and the International Energy Agency asked Russia to pump more gas. China ordered banks to prioritize loans to coal miners to boost supplies.

“I’m concerned hydrocarbon demand is not falling fast enough to match the potential under investment in fossil fuels,” said Jason Bordoff, dean of the Columbia Climate School and a former senior energy official in the Obama administration.

Coal is paradigmatic. For nearly a decade, it appeared in terminal decline as investors shunned miners and European countries shut down coal-fired power plants.

And yet, the world’s dirtiest fossil fuel won’t go away. Global consumption peaked in 2014, but rather than fall rapidly, as many expected, it stabilized in a gentle plateau. And now, just as the fight against climate change intensifies, it’s growing again, with the resurgence largely driven by China.

Oil is another case where hopes of an early peak in demand are quickly fading. In 2020, Bernard Looney, the head of British oil giant BP Plc, said it was possible that Covid marked the moment of peak oil. That view has since shifted, with BP predicting in August that demand will reach pre-Covid levels in the second half of 2022.

All of this means carbon dioxide emissions are rising too. The IEA estimates that they’ll post their second largest annual increase ever this year, reversing most of the decline during the lockdowns of 2020. On current trends, emissions will hit a fresh record in 2022 despite all government pledges bring them down, and quickly.

According to the IEA, about $750 billion will be spent on clean energy and efficiency worldwide in 2021, “far below what is required” to meet decarbonization targets. Total energy investment, including green and fossil fuels sources, will hit $1.9 trillion.

As political leaders prepare for COP26, the energy price spike has polarized views about the green transition, already an enormous challenge that involves rewiring the whole global economy. Climate change deniers and fossil fuel industry lobbyist have seized on it to campaign against green energy. On the other side, some climate activists say it shows the need to go even faster.

“Inevitably, it wasn’t going to be a transition without tension,” said Morgan Bazilian, an energy expert and professor of public policy at the Colorado School of Mines. “The balancing act politically is becoming a lot harder.”

Oil markets aren’t on the verge of a new price supercycle as plentiful supplies mean any concerns of a shortfall are misguided, the International Energy Agency said. Crude rallied to a 14-month high last week after Saudi Arabia and […]

Another ‘Day of Reckoning’ For Big Oil is on the horizon, but it is not what you think

There are several things that our team at King Operating get asked while talking with our clients. One of the questions is, will oil and gas be even needed after 3 to 5 years with […]