Coal prices are likely to remain high after soaring to new records on strengthening power demand and challenges in key supplier nations, according to a major Australian producer.

High-quality thermal coal at Newcastle port in Australia, the benchmark in Asia, the world’s largest market for the fuel, averaged $167.52 a ton in the quarter ending Sept. 30 from $52 a ton in the same period a year earlier, Whitehaven Coal Ltd. said Thursday in a production report statement.

“Both thermal and metallurgical coal prices are forecast to remain well supported due to strong demand and continuing supply tightness,” the Sydney-based supplier said. The Newcastle coal index was at $232.06 a ton as of Wednesday, according to the company. 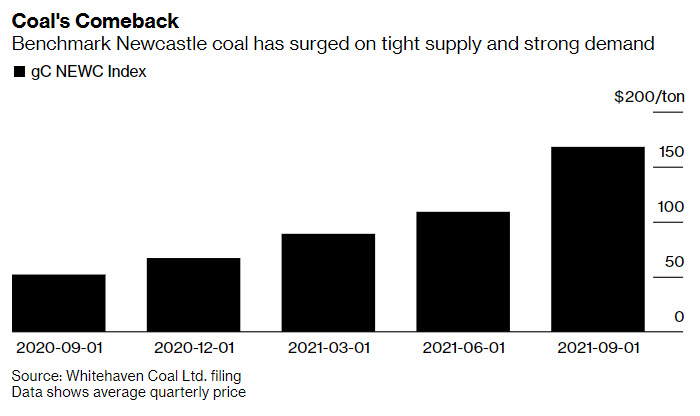 Rising demand for the fuel-driven by global efforts to spur industrial activity and boost growth after the impact of coronavirus has collided with waning output from mine hubs. That’s led to shortfalls in Europe to China and India, prompting curbs on electricity consumption and power outages.

Singapore — China is poised to receive about 21 million barrels of the new Iraqi crude grade Basrah Medium by mid March, with most of these shipments expected to be processed by the country’s integrated refining […]

Woodside Petroleum is in the final stages of working out costs on its Scarborough gas and Pluto LNG expansion project, as it faces rising labor and steel costs, the company’s boss said on Tuesday. The […]