ENB Publishers Note: The world’s energy crisis was not an overnight occurrence. It was brought on by years of bad energy policies. The rush to renewables without a plan has caused almost unrepairable damage. Do you remember the line in the “Hunt for Red October” when the Russian Captian looks to his captain and says “You have killed us all” when he turned off the safeties on the torpedoes? Well, the same applies to the rush to renewables through printing money and not working through a plan. Inflation and an energy crisis is now hear and the same can be said to them. Julian Lee on Bloomberg has some great points but, is forgetting it will take several years for the oil and gas industry to catch up. Oil and gas E&P just does not turn on and off without capital for drilling.

Like British motorists, energy markets seem to be running on hot air right now. We’ll need more than that to get through winter.

Oil producers in the Organization of Petroleum Exporters, along with their allies that make up the bigger OPEC+ group, aren’t living up to their mission to “ensure the stabilization of oil markets.”

Although they talk of ensuring adequate supplies, they haven’t followed through in their actions. That’s helped drive oil prices to levels not seen since 2014 and risks leaving consumers short of oil, just as demand gets another boost from businesses and utilities switching to burning oil rather than gas, where prices are also soaring to record levels. 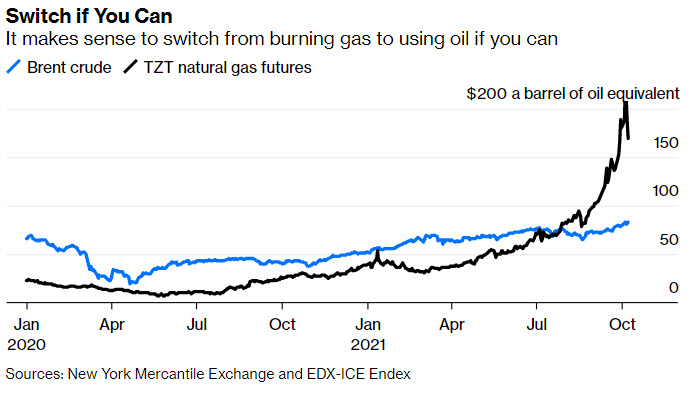 Despite evidence that it needs to supply more oil to meet demand, the group decided on Monday to press ahead with its plan to add just 400,000 barrels a day to global oil supplies at the start of November. Every analysis I’ve seen, including the group’s own, agrees that isn’t enough to prevent already low inventories from falling further by year-end. 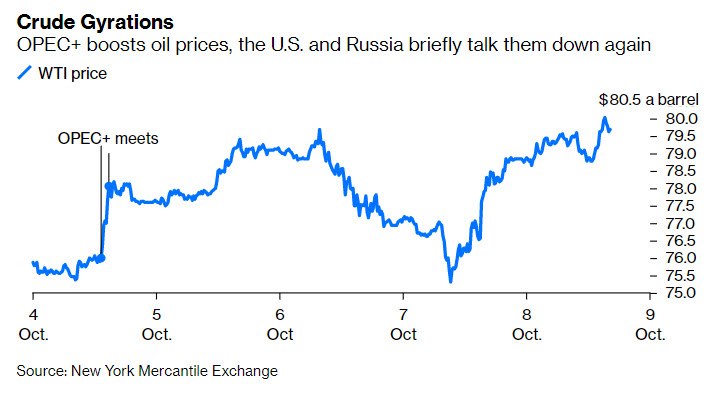 With oil being driven to multi-year highs and a natural gas supply crisis looming in Europe and Asia, it was the Russians and Americans who tried to talk markets back down.

Russian Deputy Energy Minister Pavel Sorokin said on Thursday that OPEC+ shouldn’t allow the oil market to overheat, or it would destroy demand, adding that the market is balanced at a price of $45 to $60 a barrel. Perhaps his boss should have argued that point more forcefully at Monday’s meeting.

The previous day Russian President Vladimir Putin sought to ease soaring European natural gas prices, suggesting his country could boost deliveries to record levels. Deputy Prime Minister Alexander Novak suggested that quick certification by the European Union of the controversial Nord Stream 2 pipeline — which would deliver gas across the Baltic Sea directly to Germany, avoiding transit across all those pesky countries in between — would be one way to achieve this.

While President Joe Biden’s quiet diplomacy was just as ineffective as his predecessor’s furious tweeting in getting the group to change course, U.S. energy secretary Jennifer Granholm turned to other solutions. She raised the prospect of releasing crude stored in the Strategic Petroleum Reserve to help bring down fuel prices, adding that she wasn’t ruling out the possibility of reimposing an export ban.

Oil prices subsequently plunged, wiping out all of their earlier gains. 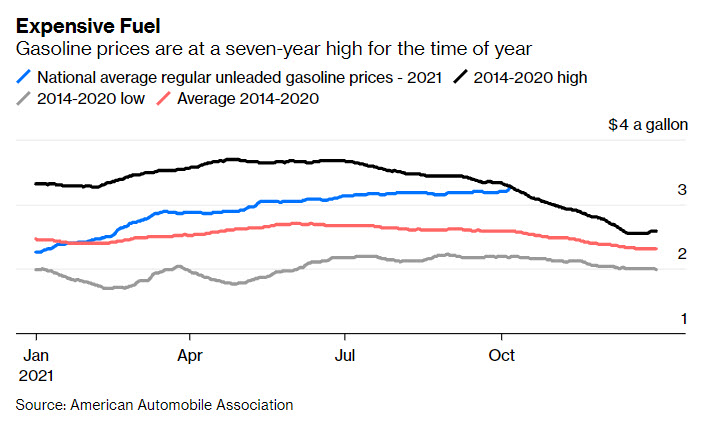 But the relief was short-lived. The U.S. Department of Energy said there were no plans to release crude from the SPR and an export ban was (quite rightly) seen as counterproductive by analysts.

Then, guess what? Prices rebounded, wiping out the previous fall in a matter of hours (see that second chart again).

All these words provided only the briefest comfort. They need to be followed with actions.

Which brings us back to British motorists. Repeated assurances from the U.K. government that there was no fuel shortage and nothing to worry about only spurred on the panic buying. It wasn’t until the number of delivery drivers was actually boosted by calling on the military to help, as I called for here, that the situation started to ease.

If OPEC+ is serious about stabilizing the oil market, it must use its monthly gatherings to manage supply more flexibly — meaning it has to be prepared to cast some of its caution aside and boost output by more than it had originally planned when the market is clearly short of supply. If the oil producers won’t put more crude on the market, then perhaps the U.S. should follow China’s example and draw down its strategic reserves.

Without more oil and gas, we’re all going to have to wrap up to stay warm this winter.

More OPEC+ Crude is Needed, How Much Depends on Who You Believe

The world needs the OPEC+ group to open the taps further to balance the oil market in the coming months, on that everyone agrees. But there’s less unanimity on just how much more crude they will have to […]

AUSTIN – Today, Commissioner Wayne Christian wrote a letter to President Joe Biden encouraging him to reconsider discussions with OPEC+ and instead unleash the private sector to produce oil domestically in America. You can view the […]

The U.S. has gone to court to seize 2 million barrels of oil that it claims came from Iran, as Joe Biden’s administration shows little sign of taking a softer line on Tehran. The Department […]