Power grids from Texas to the U.S. Midwest are at risk of blackouts if a prolonged deep freeze sets in this winter, regulators warned Thursday.

The main Texas grid could see a power shortfall of 37% in extreme conditions, the North American Electric Reliability Corp. said in a report, suggesting that the state isn’t prepared for another cold snap like the one that crippled its grid last winter. Two nearby electricity systems may also face tight supplies, according to the report.

The unprecedented warning comes after the Texas grid buckled during a cold blast in February, leaving millions in the dark, killing more than 210 people and resulting in at least $20 billion in damages. Plunging gas production was one of the leading causes of gas-plant outages in Texas, according to a report by regulators released earlier this week. Extreme weather driven by climate change is testing power networks like never before, quickly turning ample supplies into shortages.

Widespread outages in Texas remain a “valid” concern, John Moura, director of reliability assessment and performance analysis at NERC, said in a media briefing Thursday. “The industry has done a tremendous amount of what they can, but there is still work to be done to make sure they are resilient to these weather patterns. It’s going to take more than one year to build that.” 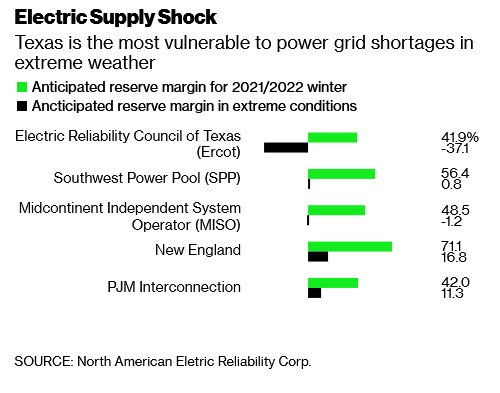 The second day of marathon hearings on Texas’s unprecedented energy crisis raised concerns about the liquidity of the state’s power market, and who will ultimately pay for the disaster as some companies face bankruptcy. Several […]

Jack Fusco, CEO of LNG producer Cheniere, joins Worldwide Exchange to discuss the global energy crisis and the role that LNG will play in solving it.