After 2022-2023’s unusually warm winter, Europe may be winning its energy struggle with Russia, but a lasting solution for energy-hungry Europe has not arrived yet. While Europe’s ad-hoc responses to Russian embargos have succeeded in changing one of the cornerstones of its economy, they are neither systematic nor sustainable.

American LNG, which has largely replaced Russian LNG, is more expensive to import while the political appetite for stopgaps like coal (which has been imported from Africa at a rate of 582% compared to prewar levels ) is rapidly shrinking. 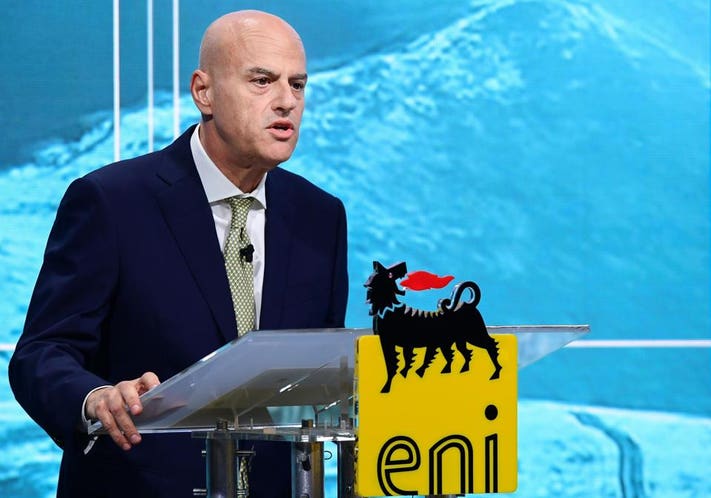 This is why Italian energy giant ENI’s Chief Executive Claudio Descalzi called for a south-north energy axis between Europe and Africa. Africa’s enormous energy potential and reserves also resonate with French President Emmanuel Macron’s assertion that “we are living the end of what could have seemed an era of abundance” to refer, among other things, to the ongoing European energy crisis. With the EU-Russia energy divorce firmly settled, the former needs a reliable energy relationship with the continent. The African Continent boasts both great oil and gas reserves (the latter estimated at around 17 trillion cubic meters) as well as huge capacities for the installation of solar and wind energy systems.

Descalzi’s insistence on forming an EU-Africa energy nexus represents a dramatic expansion of the ongoing arrangements between the two continents. Thanks to the strong economic connections and political-diplomatic links, the EU members and some African countries have had strategic energy partnerships for many decades. In particular, North African states are part of the EU’s neighborhood policy in the southern Mediterranean and in the Union for the Mediterranean. African and European Heads of State launched the Africa-EU Energy Partnership (AEEP) in the framework of the Joint Africa-EU Strategy in 2007, and it should be revived and boosted. Individual bilateral links between African states and EU member states have also been active for decades and are accelerating, with the two largest economies of each continent (Nigeria and Germany) deepening their cooperation in 2022.

Despite these relationships, Africa remains an under-tapped energy market for the EU. This owes largely to a difficult political paradox Europe put itself in. The EU is interested in strengthening economic and energy partnerships with Africa, but these often require long-term commitments to develop and financially sustain such deals. This conflicts with existing commitments to the green transition which sees all hydrocarbons as “bridge fuels”, thus disincentivizing any long-term relationships. These combined with traditional investor fears and stereotypes of Africa hamper what could be lucrative mutually beneficial partnerships. 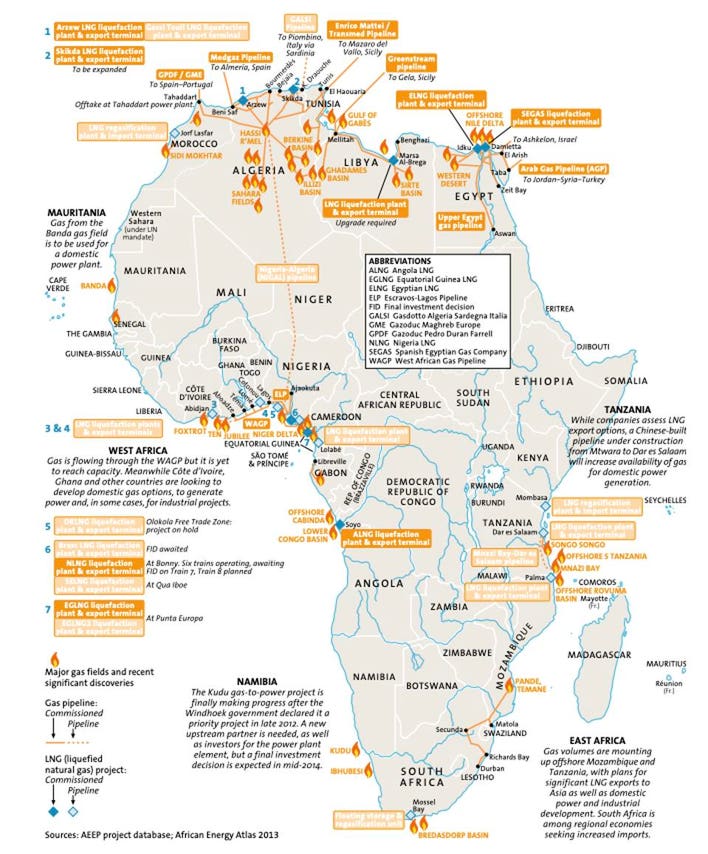 The opportunities for EU-African energy partnerships are massive. North Africa has enormous renewable energy potential, particularly in solar and wind power. The electricity grids of Morocco and Spain are already connected. Solar power is already exported to Europe. Egypt and Greece are planning the construction of a massive 3,000 MV maritime electrical interconnection line via Cyprus and Greece to carry electricity produced in solar or wind parks. The TuNur and Elmed in Tunisia intend to deliver clean electricity to Europe, via Italy, with TuNur’s final investment decision forthcoming in 2024. Increased imports of Namibian and Nigerien uranium could fuel Eastern Europe’s nuclear power surge.

Africa is also taking a commanding role in hydrogen power production, seeking to utilize hydrogen as a local force multiplier for its widely available and dispersed energy sources. Green hydrogen, projects, albeit in their early stages, are supposed to increase energy efficiency and environmental and financial sustainability in the six members of the Africa Green Hydrogen Alliance (Egypt, Kenya, Mauritania, Morocco, Namibia, and South Africa). Their success remains to be seen. 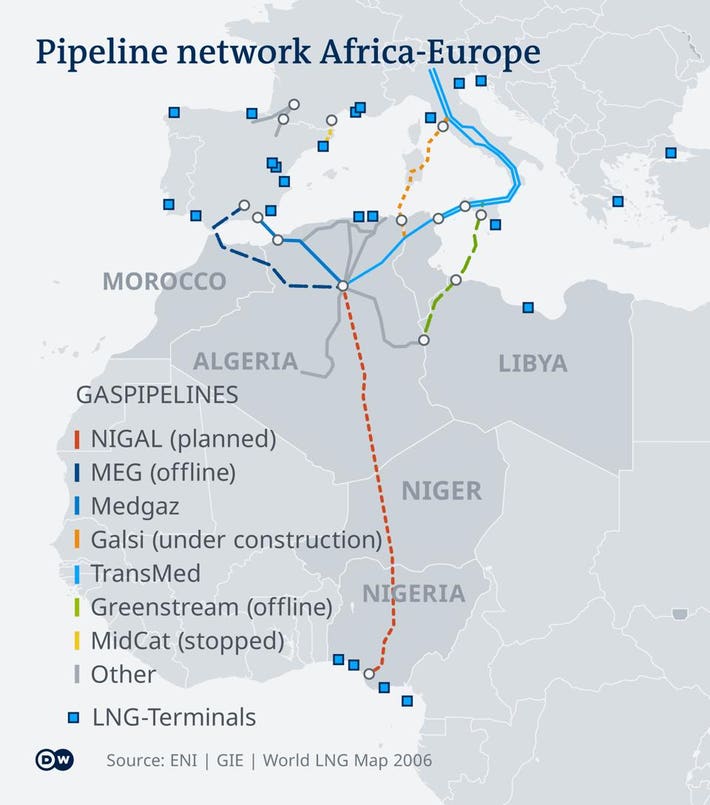 The crowning jewel of any future EU-African energy relationship would be the Trans-Sahara Gas Pipeline. Connecting the Mediterranean to hydrocarbon-rich Niger and Nigeria through the Sahara Desert via Algeria, this 30 bcm pipeline would cement EU-African relations. This would allow for cheaper gas transported via new pipelines across the continent. If the EU can overcome initial political, financial, and technical barriers, the prospects of relying on multiple democratizing (albeit sometimes unstable) African states is far preferable to reliance on Russia, Qatar, or current expensive LNG arrangements.

The success of the EU-Africa energy cooperation is conditioned to political choices and attitudes that the two continents adapt to each other. As a rule, European green evangelism comes off as very patronizing. It is easy to preach green absolutism after you have already developed and destroyed many environments in the past and are now enjoying a life of abundance in Western post-industrialist society. It is much harder to stomach if you live in energy poverty and need to develop out of absolute deprivation. For example, in September 2022 political leaders in Uganda and Tanzania reacted furiously to the European Parliament which called for “an end to the extractive activities in protected and sensitive ecosystems, including the shores of Lake Albert” (which forms part of the planned East Africa Crude Oil Pipeline). This has been interpreted by some as a form of neo-colonialism and imperialism against the countries’ sovereignty at worst, and as a foolish demand which would contribute to their continued poverty at best. This tension also surfaced in projects like the Global Gateway Africa – Europe Investment Package, through which Europe aims to invest €150 billion to accelerate green transition projects in Africa.

However, EU green energy and low carbon development strategies and ambitions must take into consideration the need for African countries to fight their way out of energy poverty, pursuing economic development while selling hydrocarbons in the absence of sufficient investments to build resilient national renewable energy industries. The EU could turn the current hydrocarbon shortage and the green transition into a social and economic opportunity beyond Europe’s borders and develop renewables, uranium, and hydrocarbons in Africa to benefit both continents.

The introduction of a temporary gas price cap in Europe could result in a reduction in market liquidity, new research suggests. Last month, the European Council adopted a regulation establishing a market correction mechanism (MCM), aiming to […]

The Russian President, Vladimir Putin, gave his annual New Year address on Russian State TV on the evening of December 31st from frontlines with Ukraine, in an extended speech – the longest of his Presidency. […]

Countries imposing COVID rules for travellers from China – Will this impact oil demand?

Several countries have imposed restrictions on travellers from China because of a surge in COVID-19 infections after the country rolled back its stringent “zero-Covid” policy. From the United States to Japan, nations are worried that […]

One of the more important “existential” questions in today’s climate debate is what constitutes a real and serious climate plan and whether Republicans have one. On one side, the environmental left, led by groups like […]