Skyrocketing prices for natural gas, coal and electricity are putting extra pressure on oil markets, boosting demand as industries and power generators seek to switch to liquid fuels to keep a lid on costs. But don’t expect the oil producers to boost supplies more rapidly over the coming winter — they’re more worried about what might happen next year.

Fuel switching from gas and coal will boost global oil demand by 500,000 barrels a day during the northern hemisphere winter. That’s the consensus view emerging from analysts at the International Energy Agency, Citigroup, UBS, and elsewhere. But producers are sticking to production plans they made back in July. 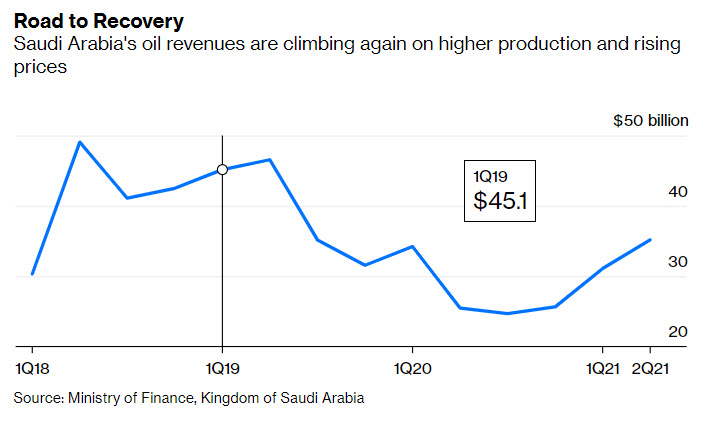 Instead, they are praising their own market management, pointing out how energy markets that don’t have an OPEC+ equivalent to manage them — gas, coal, electricity — have seen huge price rises. Oil looks good in comparison, with its price only doubling over the past 12 months and hitting a seven-year high, rather than setting new records as the other fuels have. 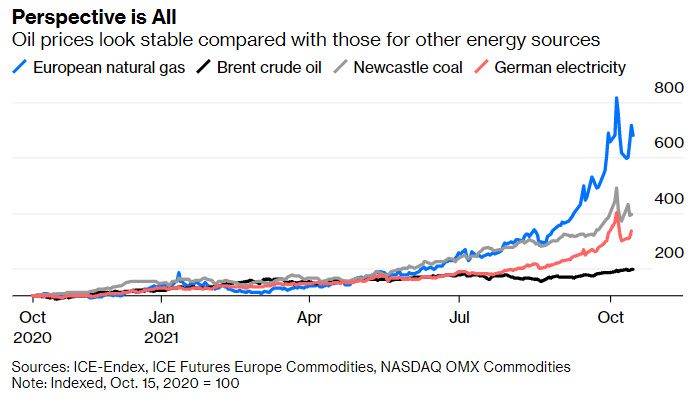 One reason for OPEC’s reluctance to open the taps more quickly, perhaps, can be found in the oil demand forecasts of major agencies like the IEA.

Yes, it warned in its most recent monthly report, published on Thursday, that “soaring natural gas prices have prompted a switch to oil that could boost demand” significantly. And yet, if you look at its demand forecasts, it now sees oil consumption in the final quarter of 2021 as significantly lower than it did back in July and, as a result, it has also reduced its assessment of how much OPEC crude the world needs to balance supply and demand. 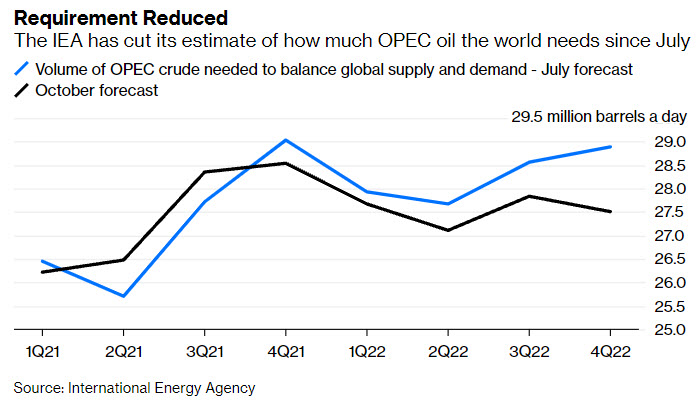 But the real issue seems to be that the oil producers aren’t worried about this winter. The bigger concern on their minds is a massive over-supply of oil next year.

Speaking on Thursday at the Russian Energy Week in Moscow, Saudi Energy Minister Prince Abdulaziz bin Salman said he was concerned about the oil market shifting to a supply surplus in 2022, creating a huge excess stockpile by the end of the year. “We’ll have a challenging year,” he said. “We keep telling people we should look way beyond the tip of our noses.”

Well, that’s certainly cause for concern if you’re an oil producer. But it would be an even bigger worry were it actually true. 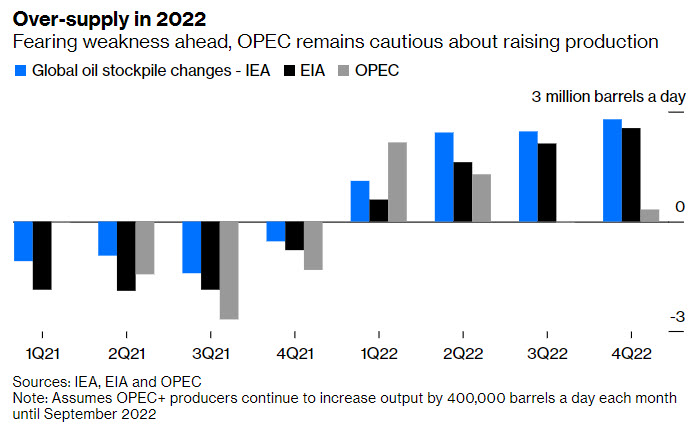 OPEC’s analysts see the oil supply deficit in 2021 — which has led to the drawing down of excess stockpiles built up in 2020 — switching to a surplus next year. It looks like a compelling argument for caution. But that surplus is built on the fallacy that the producer group and its allies will keep adding 400,000 barrels a day to supply. They won’t. In fact, they can’t.

Several of them aren’t expected to meet their current output targets, let alone any future increases. Angola, Nigeria and Malaysia head that list. Several others, most notable among them Russia, are soon going to be in a similar position.

Russia’s output cut was measured from a baseline of 11 million barrels a day, the same as Saudi Arabia’s. But while the desert kingdom has actually pumped that much crude in the past, Russia never has. In fact, it has probably never pumped more than 10.4 million barrels a day. Yet its output target under the OPEC+ deal will reach that level by April 2022.

Some suggest that Russia’s failure to lift production over the summer shows that it is already struggling, although a big jump in reported output for September, up month on month by almost 300,000 barrels a day, may allay some of those worries.

If you then consider the ever-retreating return of Iranian barrels, which slip further into the future as talks about a return to the 2015 nuclear deal are delayed, it’s easy to see much of next year’s huge surplus quickly evaporating.

Through a cynical lens, refusing to increase supply looks like a convenient excuse for oil producers to ignore other countries’ calls to open the taps more quickly — and to enjoy higher prices. But they must then hope that the doubling of oil prices doesn’t combine with soaring energy costs elsewhere to stoke inflation and curtail industrial activity and consumer buying to the point where recovery is choked off and oil demand is stifled.

For now, OPEC seems to be banking on a continuing recovery from the pandemic. Don’t expect them to pump more oil than they have already planned, and probably not even that much.

Why the U.S. thinks plan to force cap on Russian oil prices could actually work

The U.S. still remains ‘a ways away’ from reaching an international agreement to impose a price cap on Russian oil exports, with limited enthusiasm from the world’s largest energy buyers India and China, so far, […]

Energy News Publishers Note: Russia and Belarus have had a long term strife ridden relationship, impacted by the reliance of Belarus on Russia for their energy resources. The article from GPF is articulating the political  […]

At the COP26 conference, a 190-strong coalition of countries, banks and investors lined up to give their support to plans to phase out coal power. The timing was less than perfect. Today, just a few […]