In hindsight, June 2022 might go down as the last month when the markets at large were still yet to go into full panic, acknowledging economic recession as a necessity but not yet succumbing to a spiral of fear and agitation. The pricing of August-loading grades coming from the Middle East still reflects that feeling when China was still expected to finally come back from its lockdown-induced demand slump when the global shortage of supply still kept market fundamentals extremely tight. As we will see below, August 2022 will see many grades reach their highest-ever market differential. It is more than likely that even in the following month the seemingly incessant appreciation of crude will continue – just looking at futures curves right now, with front months being around $100 per barrel, indicates an even more distressing picture than before the crude sell-off. Yet the months following August will already have an additional psychological layer attached – everybody will be looking at signs and proofs of demand destruction taking place, making it difficult for Middle Eastern NOCs to be straightforwardly and unabashedly assertive with their prices. 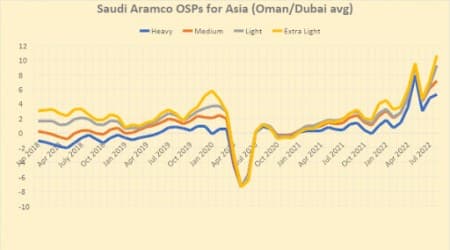 Source: Saudi Aramco. Saudi Aramco lifted all its Asian formula prices for cargoes loading in August 2022, availing itself of steepening Dubai backwardation as the cash-to-futures spread moved up by another $2.30 per barrel. This put most Saudi grades close to the record highs we have seen in May, as could be seen with Arab Light, arguably the most important grade it markets, as the Saudi NOC priced it just below the $9.35 per barrel premium to Oman/Dubai. Despite the naphtha weakness coming from a continent-wide oversupply streak, the monthly hikes were even more marked for lighter grades – Arab Extra Light went up by $3.50 per barrel, making the $10.65 per barrel premium vs Oman/Dubai the highest since Aramco started issuing OSPs. Following reports that Saudi Aramco cut the July allocations of at least four Asian refiners, most of them located in China made sure that the upcoming month’s nominations were fully met. 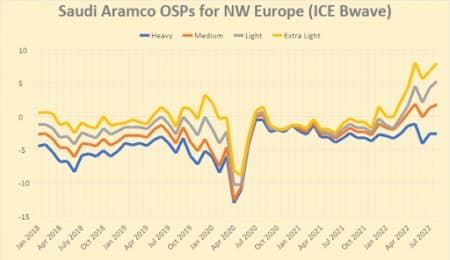 Looking into Europe, Saudi Aramco opted for a clear delineation between heavy and light grades, just as it had done in Asia. The NW Europe differential for Arab Heavy, at a $2.6 per barrel discount to ICE Bwave, was simply rolled over from the previous month, whilst the lightest Saudi grade on offer, Arab Extra Light saw a $1.20 per barrel month-on-month hike to an $8 per barrel premium to Bwave. Apart from the overall tightness in European markets, stemming from the gradual shunning of Russian crude and products, the price increases must have also come from seeing Europe-bound June exports move to their highest monthly level in more than two years, at 750,000 b/d. As for Saudi exports in general, they have been declining for the second consecutive month. After the peak in April, they have lost more than 300,000 b/d in volume and dropped to 6.7 million b/d in June. Offsetting the decline in outright oil, exports in products have simultaneously increased, too, implying that Saudi Aramco refines more than previously thanks to Jizan, however the extent of product hikes so far lags the drop in crude. 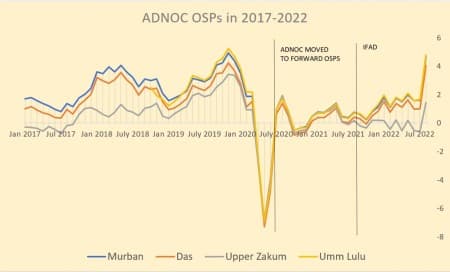 The UAE national oil company ADNOC set the August price of its benchmark light sweet grade Murban at $117.53 per barrel, up almost $8 per barrel compared to the previous month. For the first time since Murban started trading, its premium vs Dubai has moved above $2 per barrel, in fact, it soared to $4.7 per barrel in June. Whilst the market still values grades yielding a lot of light distillates, ADNOC’s medium sour grades such as Upper Zakum are still struggling – the latter’s differential to Murban dropped by another dollar, sinking to a $3.20 per barrel discount. In the meantime, ADNOC has been working to promote foreign investment into its oil and gas industry – with the Emirati company attracting some $65 billion already since 2016, the idea is still to attract as many partners as possible to ensure the fulfilment of the 5 million b/d production capacity target. 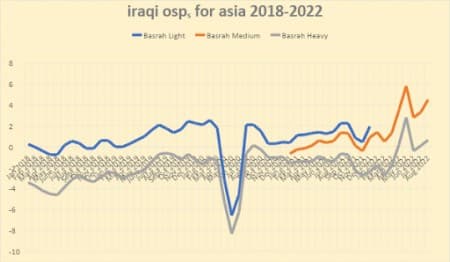 The Iraqi state oil marketer SOMO was toeing the line of Saudi Aramco in Asia, increasing its August formula prices by $1.20 and $0.55 per barrel for Basrah Medium and Basrah Heavy, respectively. In Europe, however, the Iraqi willingness to chart a separate course from Saudi Aramco is becoming ever more visible. Barring Arab Heavy, the Saudi NOC increased every single European formula price in August – in stark contrast to that, SOMO dropped all its OSPs. Whilst it should be mentioned, as usual, that SOMO is pricing its formula prices off Dated Brent, a spot market assessment issued by Platts, the contrary direction is nevertheless indicative of just how much the Iraqi state oil marketer wants to buck the trend of aggressive Saudi pricing. Basrah Heavy is a good example, with the August differential of Iraq’s heavy sour benchmark seeing another $1.75 per barrel decline to a $12.75 per barrel discount to Dated Brent, the steepest differential it has ever seen. 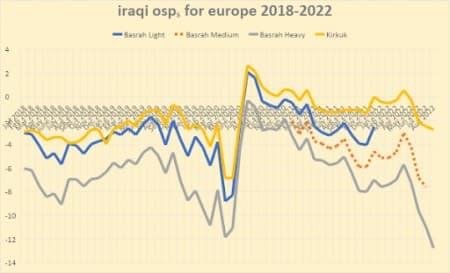 Iraq has been working towards expanding the export capacity of its southern ports and if one were to listen to its top federal officials, there would be a substantial increase in outflows starting from September. As things stand right now, the loading capacity of its Basrah port stands at 3.3 million b/d, to be more specific 1.1 million b/d for Basrah Heavy and 2.2 million b/d for Basrah Medium. The idea was to attain a 150,000 b/d increment by September, however, judging by recent SOMO utterances this has been revised to just 50,000 b/d. To a certain extent, the Iraqi federal authorities could play down the delays in project management, seeing the difficulties involved in maintaining production rates – just very recently, Baghdad lowered the production plateau target of its largest oil field Rumaila to 1.7 million b/d from 2.1 million b/d. Whilst the root cause of the downgrade lies in the project operators’ inability to maintain adequate water injection rates, it would not necessarily mean lower production in the now – the upgraded capacity ought to have served as Iraq’s spare capacity. 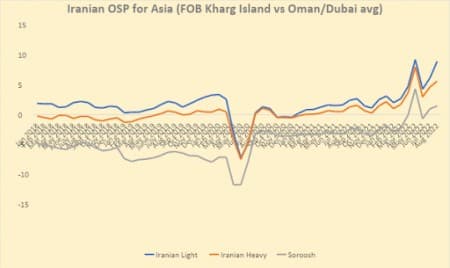 The Iranian national oil company NIOC increased its August formula prices going into Asia-Pacific by $0.50-$2.80 per barrel, effectively copying the changes made by Saudi Aramco. The $2.80 per barrel month-on-month increase of Iran Light (now at a premium of $8.90 per barrel) is a replica of pricing changes made to its peer Arab Light, keeping the spread between the two at $0.4 per barrel. However, as hard as NIOC might try, its formula prices are becoming increasingly academic – the arrival of Russian Urals into India and China have saturated the Asian crude market even further. According to media reports, the main export grade of the country, Iran Light, used to trade at a $5 per barrel discount to Oman/Dubai, however, now that there is more immediate competition around and the US continues to slap new rounds of sanctions on Iranian exports, the discounts provided by NIOC have doubled to double-digit figures on a per barrel basis. 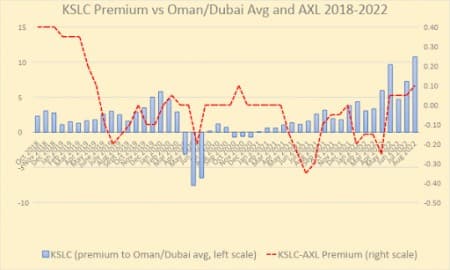 Kuwait’s state-owned oil company KPC has hiked the August-loading OSP of its flagship medium sour grade KEB by $1 per barrel, setting it at a $7.15 per barrel premium to Oman/Dubai. This is entirely in line with Saudi Aramco’s pricing of Arab Medium, the immediate peer of the Kuwait Export crude. Whilst the self-reported production figures coming from OPEC+ countries might raise a couple of eyebrows in terms of their correctness, Kuwait has been one of the two countries that have reportedly overproduced their June 2022 quota, churning out 2.73 million b/d on the back of a 2.72 million b/d target (the other overproducer is the UAE). Kuwaiti media reports have been focusing on soaring upstream costs in the Middle Eastern country, with average production costs almost doubling over the past decade, from $4.9 per barrel in 2012 to $8.5 per barrel right now.

Big Oil majors in the United States have found themselves the target of much pressure to boost production lately, as prices go wild amid a tight—and tightening—market. At the same time, the U.S. government, as […]

(Bloomberg) — Four European gas buyers have already paid for supplies in rubles as President Vladimir Putin demanded, according to a person close to Russian gas giant Gazprom PJSC. Most Read from Bloomberg Russia to […]