When the energy crisis hit a nadir two years ago, highly indebted American oil and gas companies quickly changed their playbook, adopting stricter cost discipline, cutting back on expensive drilling programs, and vowing to return more cash to shareholders in the form of dividends and buybacks. Luckily for them, the good times are here again, with high oil and gas prices helping to massively improve their balance sheets.

However, many shale companies have so far been reluctant to go back to their trigger-happy drilling days, preferring instead to fall back on their dwindling stocks of drilled but uncompleted wells (DUCs) to keep going. Indeed, according to the  U.S. Energy Information Administration’s latest Drilling Productivity Report, the United States’ DUC tally plunged to 4,245 in June 2022, a sharp drop from 8,900 at its peak in 2019.

But that could soon become a thing of the past if the latest announcement by OFS major Schlumberger Ltd (NYSE: SLB) is any indication.

On Friday, the Houston, Texas-based company raised its full-year revenue guidance following a strong Q2, at which time it announced that “growth was very broad across all dimensions.”

Schlumberger says it now sees sales of “at least” $27B this year, good for an 18% increase from 2021, citing the biggest jump in demand for its services in more than a decade. Schlumberger says annual sales will rise the most in 11 years as energy security concerns outweigh recessionary fears among major oil explorers.

“Growth was broad-based, characterized by a favorable mix of exploration and offshore activity and the increasing impact of improved pricing, resulting in the largest sequential quarterly growth since 2010,” CEO Olivier Le Peuch revealed during the company’s earnings call.

Earlier, there were fears that OFS majors like Schlumberger, Halliburton (NYSE; HAL), and Baker Hughes (NASDAQ: BKR) would be among the first victims of the Ukraine crisis due to their sheer size and brand recognition. Indeed, Rystad Energy’s head of energy services research Audun Martinsen told the Financial Times that their smaller peers were more likely to continue operating under the radar because they are not directly exploiting or exporting oil and natural resources. However, the latest set of results by SLB proves that these fears were unfounded.

SLB stock has surged 8% after the announcement, bringing its year-to-date gains to 11.3%. 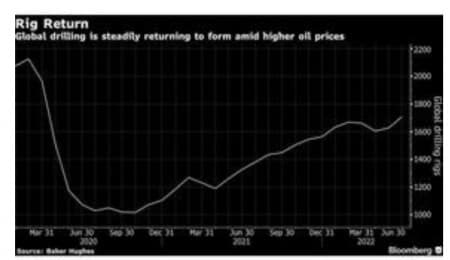 Schlumberger’s robust growth is not an isolated case.

Oil explorers across the globe are rapidly expanding the search for crude and natural gas on land and at sea. In the sector’s most bullish forecast yet, Schlumberger compared the current era to the heady days of 2008 when oilfield contractors posted some of their best results in history thanks to high energy prices.

“We believe the accelerating international upcycle not only has multiple years to run, but will also unfold even if crude prices pull back modestly,” Scott Gruber, an analyst at Citigroup Inc., has written in a note to clients.

According to James West, an analyst at Evercore ISI, on the global scene, oil companies are expected to grow spending by 22% this year to $450 billion, marking the fifth-biggest annual expansion since 1985.

Even better for investors, OilField Services, MLPs, Oil & Gas Producers, and Midstream are all trading at considerable discounts to their 2014 highs. OFS stocks are the most undervalued, with the sector trading at a massive 70%+ discount relative to the 2014 zenith. 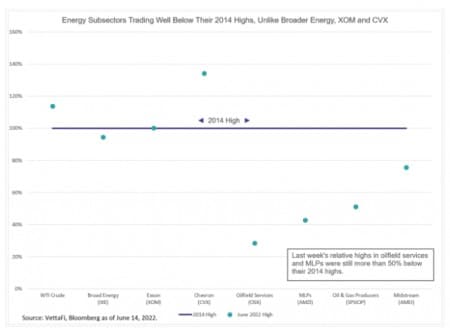 Drilling and well completions, along with pricing for those services, had been climbing higher, according to OFS companies, with oil workers also noting that job offers have been on the rise. Oilfield workers were some of the hardest hit demographic by the Covid-19 pandemic in 2020. Nationally, the oil and gas industry is estimated to have lost 107,000 jobs as per global consulting firm Deloitte, with an estimated 200,000 roughnecks losing their jobs at the height of the global lockdowns.

According to trade group Energy Workforce & Technology Council (Council), U.S. oilfield jobs have been increasing over the past year.

Meanwhile, pricing power has been returning in niches like high-spec onshore drilling rigs, with day rates for such U.S. rigs steadily climbing.

We release an updated inventory of what we consider drilled but uncompleted wells (DUCs) each month in our Drilling Productivity Report (DPR). We publish updates to DUC estimates by region in a publicly accessible spreadsheet. […]