Cradle of oil and gas.

Out of the top 7 oil producers, the Middle East has three: Saudi Arabia, Iraq, and UAE. The Middle East is indeed a cradle of oil and gas production.

But the Middle East is not known as a trendsetter for its transition from fossil fuels to renewable energies as illustrated by nations in Europe for example. It comes as a surprise, therefore, that the chairman of the next yearly climate convocation of the United Nations, COP28, is from the UAE. 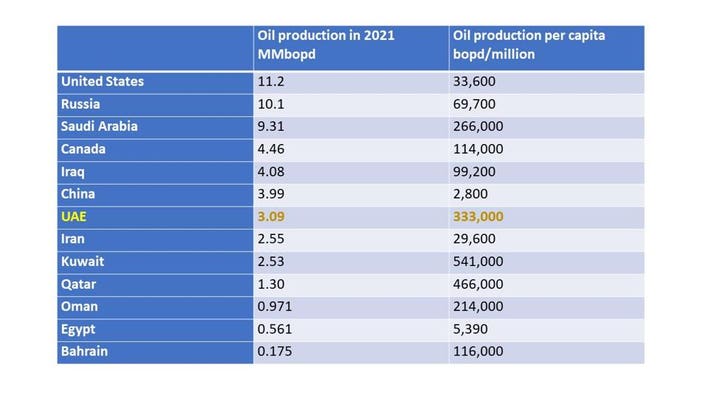 ADNOC is UAE’s state-owned oil and gas company. It’s ranked #9 in 2022 in oil and gas finance rankings – one step ahead of ExxonMobilXOM at #10.

Let’s take a look at ADNOC’s recent activities in growing oil and gas and compare this with their growing climate initiatives.

ADNOC is to buy a 25% stake in OMV, an oil and gas and chemicals company based in Austria, for a little over $4 billion. This was announced in December 2022.

This is a small part of $150 billion of spending over 2023-2027 approved by ADNOC’s board that will be used for a new company division that will address (1) international growth and (2) low-carbon solutions.

The European gas market will also be a focus for ADNOC since gas shutoffs by Russia, such as the Nord Stream 1 pipeline, have put a premium on gas imports to Europe. Just last week, Germany opened its new import terminal for LNG (liquefied natural gas).

UAE is ranked 13th in a list of countries exporting LNG in 2021. But this is only a twelfth of what the top country, Australia, exports. Clearly UAE have a lot of potential here because they are ranked 9th in total gas reserves.

A larger portion of the $150 billion is earmarked for decarbonizing the oil and gas industry. $15 billion will be directed to investing in clean power alternatives and electrification, in carbon capture and storage (CCS), and in international partnerships, all by 2030.

This is part of their commitment, in November of 2022, to net zero greenhouse gas (GHG) emissions by 2050. The company says it will lower its carbon intensity by a quarter by 2030. It also says it will raise to 5 million tonnes its CCS capacity by 2030. For comparison, Rystad Energy predicts that for net-zero by 2050 worldwide CCS will need to reach 8 billion tonnes of GHG per year. Every little bit will help, of course, but the world is going to need millions of little bits.

COP28 to be chaired by CEO of ADNOC.

Given this background, it’s a surprise to many that the CEO of a major oil and gas company, ADNOC, has been named as the chairman of the UN’s COP28 climate gathering in Dubai, UAE, in December of 2023.

His name is Sultan Ahmed Al Jaber and he is also the country’s Minister for industry and advanced technology. COP28 will clarify just how much further countries will need to go in restricting their emissions.

If climate scientists insist the world needs to rapidly cut oil and gas production, how can the head of an oil company push that in the COP28 meetings? One suggestion is that Al Jaber stand down immediately as head of ADNOC.

Another answer is who would be better to lead the COP28 event than Al Jaber who has and is moving forward the integration of energy security and climate security?

Yvo de Boer was climate head of the UN from 2006 to 2010. He has said the UAE has adopted a “sound green growth strategy” and has been a major investor “in renewable energy both at home and abroad.” ADNOC is following this strategy.

Despite this, COP 28 in Dubai will be a boxing ring of debate between the need for fossil fuels and the need to remove the 73% of worldwide GHG emissions from burning fossil fuels.

There is a perceived conflict of interest, and the chairman of COP28, Sultan Ahmed Al Jaber who is also the CEO of ADNOC, will receive criticism from both sides.

He will need support from “integrators” – those who understand that oil and gas will continue to be needed for energy security and those who grasp the potential for climate calamities – especially if GHG emissions are uncontrolled the earth by 2100 will reach a temperature higher than it’s seen for the past million years.

Get the best of Forbes to your inbox with the latest insights from experts across the globe.
Source: Forbes.com
ENB Top News
ENB
Energy Dashboard
ENB Podcast
ENB Substack