Bloomberg Economics has gamed out three scenarios for the global economy from the Russia-Ukraine conflict, with implications ranging from little change to current central bank plans for taking back pandemic-era monetary stimulus to a potential rewrite of the medium-term outlook for the Federal Reserve and European Central Bank.

A relatively quick end to the fighting sees energy prices settle around their current level. Financial conditions — which are set by factors including bond and equity markets — are tighter, but there’s no sustained global selloff of riskier assets.

For the euro region, a recession is avoided, and an interest-rate increase by the ECB remains a possibility for December. Inflation could be touching 3% by year-end as the economy absorbs higher energy costs.

The U.S. would see consumer prices decelerate to near 5% at year-end. While the Fed would implement a series of rate hikes, the seven moves penciled in by some economists would be off the table given the jump in risks.

Disruptions to physical supplies of Russian crude and gas, from fighting or sanctions or both, worsens the shock to global energy prices.

Euro-area inflation would head for close to 4% by year-end, intensifying the real income squeeze. Placing more weight on the risks to growth than the temporary energy price shock, the ECB could push a first rate hike back well into 2023.

Headline inflation in the U.S. could touch 9% in March and end the year at close to 6%. Tighter financial conditions and weaker exports to a potentially recession-hit Europe would drag on growth. The Fed would be left conflicted. Rate hikes still start in March, but the reverberations would tip the scale toward a slower pace of tightening in the second half of 2022.

Facing maximal sanctions from the U.S. and Europe, Russia could conceivably retaliate by turning off the flow of gas to Europe.

The ECB has estimated that a 10% gas-rationing shock could trim euro-area GDP by 0.7%. With more than 40% of Europe’s gas coming from Russia, quadrupling that would mean a blow of almost 3%. The euro area would head into recession, and ECB rate hikes would be postponed into the indefinite future.

For the U.S., a European recession, a jump in credit premiums and a sharp appreciation of the dollar would produce a sizable growth shock. The Fed would have the same quandary as in the previous scenario, only more so. The nightmare for monetary policy would be if inflation expectations become unanchored, necessitating aggressive tightening even as growth takes a hit.

How War in Ukraine Threatens the World’s Economic Recovery 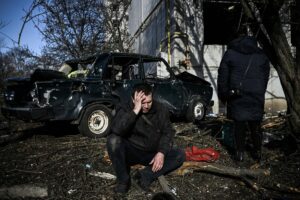 Russia’s invasion of Ukraine carries huge risks for a world economy that’s yet to fully recover from the pandemic shock.

Investing in the great energy transition

A shortage of wood, appointments with chimney sweeps are hard to come by and IKEA selling heat exchangers. Energy security is a red-hot issue due to the electricity crisis in Europe. Environmental action programmes and […]

Tanks and bodies mark path of Russian retreat near Kyiv

Russia has put Israel on notice over significant ongoing rumors that the Israeli government is preparing to supply Ukraine with lethal military aid. So far its aid has been only humanitarian and non-lethal equipment, with […]