Sure is hot out! And what better time for a paper to appear in the Journal of Applied Meteorology and Climatology describing the construction of the “all-time” records for various types of weather extremes for each of the 50 United States plus Puerto Rico and the U.S. Virgin Islands. The paper details efforts of the U.S. State Climate Extremes Committee (SCEC) established by the National Climatic Data Center (NCDC) and led by Dr. Karsten Shein. Basically, the SCEC dusted off old records and found other new sources. So now we have “new and improved” data (available here) for the value, the date and the location of the all-time high and low temperature, greatest 24-hr precipitation, greatest 24-hr snowfall and greatest snowdepth for 50 states and two territories. The statewide record extremes have been updated through 2011 and are subject to continuous updating.

This paper is an interesting read for those who perseverate on climate history and how it is constructed from a variety of observations both made from “official” (federal) observing stations as well as those deemed reliable from “non-official” observations (such as 12-oz soda bottles or credible “amateur” observer accounts). The new effort resulted in “the revision of 40 percent of the values” contained in the old dataset at NCDC and “underscored both the necessity of manual quality assurance methods as well as the importance of continued climate monitoring and data rescue activities to ensure that potential record values are not overlooked.”

It also is useful for putting the recent heat wave in perspective. Despite the 24/7 caterwauling, only two new state records—South Carolina and Georgia—are currently under investigation. And, looking carefully at Shein et al. dataset, there appears to be a remarkable lack of all-time records in recent years.

This is particularly striking given the increasing urbanization of the U.S. and the consequent “non climatic” warming that creeps into previously pristine records. Everything else being equal—and with no warming from increased greenhouse gases—most statewide records should be in or near big cities. But they aren’t.

This year there were a huge number (many thousands) of reports of daily high temperature records being set across the eastern two-thirds of the country in recent weeks, and even a large number (a few hundred) reports of all-time records high temperatures being set for a particular location. But if only two new statewide records were set, that’s hardly an historic heat wave when considered in its totality.

In Table 1, below, we list the all-time record daily maximum temperature observed in each of the 52 entries (as compiled by the SCEC) and the date and location where it was recorded. Notice that the vast majority of the all-time records were set more than half a century ago and that there are exceedingly few records set within the past few decades. This is not the picture that you would expect if global warming from greenhouse gas emissions were the dominant forcing of the characteristics of our daily weather. Instead, natural variability is still holding a strong hand.

In Table 2, we’ve compiled the top five years when the most records were set. When multiple years tie for the high, each individual year gets a fraction of a “record”. So, for example, 1954 and 1933 each get a half of a record for Colorado. 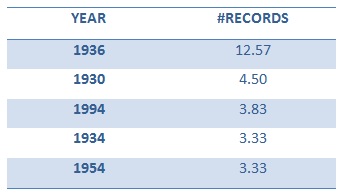 But this doesn’t stop people from implying that last week’s heat wave as an indication that global warming is leading to unprecedented conditions.

Capital Weather Gang (CWG)—the popular and respected weather blog for conditions in and around Washington DC, and one which is closely watched by the media, was quite vocal all about all-time records of one sort or another being set in our Nation’s Capital during last week’s heat wave.

If the Shein et al. methodology is applied to DC’s temperatures, then CWG’s very public pronouncements (they were picked up on the Drudge Report) are not all going to stand. That’s because CWG relied only on a single record, while largely ignoring the comprehensive set of observations historically taken within the geographical boundaries of the District of Columbia. The single record used by CWG is the “official” version of the Washington DC daily temperature which is a record which has been stitched together from observations made at National Airport (from 1945 through the present), which by the way is not even in the District of Columbia, and from observations taken at a Weather Bureau location at 24th and M street (1889 through 1944, and other locations prior to then). But when the records were concurrent (which they were during the 1940s and 1950s), only one is included (DCA).

If you really wanted to establish all-time records for Washington DC, you’d have to consider all available records that are credible—rather than relying on a data for a single “station.”

That’s what Shein et al. did. Although the SCEC has not yet compiled the all-time weather records for Washington DC, the word is that they are in the process of doing so, and are considering all available observations.

The CWG should do the same when discussing records for “Washington DC”. Or at the very least, they must be very clear that they are discussing a single (changing) location (i.e., Reagan National Airport, the downtown City Office, etc.) rather than Washington DC as a whole.

Here is an example of how things can go awry.

According to CWG, the recent heat wave “Washington D.C.” tied its record for the longest string of consecutive days in which the daily high temperature was 100°F or above. According to the CWG, the record was/is 4 days set in 1930 and 2012. However, in July/August 1953, 5 days in a row with temperatures of 100+°F were observed at the old Weather Bureau observing station at the City Office. These observations were from “an” official weather station within DC but not part of “the” “official” stitched together record. If the NCDC SCEC were compiling all-time strings of consecutive days of 100+°F, they most certainly would consider the old City Office records (including during the time of overlap with DCA observations), something that the Capital Weather Gang opted not to do.

Whether or not additional examination would alter any of the other “all-time” temperature that the Capital Weather Gang identified as being broken in “Washington DC” during the recent heat wave is unknown at this time.

One lesson here is that when considering “all-time” extreme weather records for a particular region, a comprehensive study must be undertaken (as described by Shein et al.) rather than simply deferring to a single station record.

The other take-home is that one has to be very careful about attributing the recent extreme temperatures to dreaded global warming. As noted above, there are surprisingly few all-time state records in recent years. Further, a look at their table indicates that only one of these—Providence RI, in 1975—comes from a city. Somehow—and this seems impossible—the dreaded greenhouse effect cannot raise already climbing urban temperatures to state record levels.

We can thank the SCEC for helping to do most of the dirty work in establishing an accurate dataset of all-time statewide record extremes for the United States that can be relied upon into the future, so that accurate assessments can be made when comparing current extreme weather events to past ones.

Singapore, 24 June (Argus) — Singapore is eyeing the use of low-carbon hydrogen along with carbon capture, utilization and storage (CCUS) technology in its transition to a low-carbon future and away from fossil fuels. This […]

Denbury and Nutrien Announce Agreement for Transportation and Storage of CO2 to be Captured from Nutrien’s Planned Clean Ammonia Project in Geismar, Louisiana