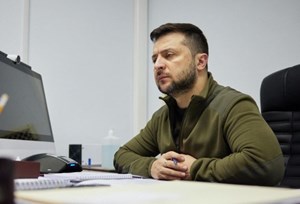 Overall crude shipments edged lower in the seven days to May 20, but showed little clear impact from the EU restrictions that came into effect on May 15. A total of 32 tankers loaded about 24 million barrels from Russian export terminals, according to vessel-tracking data and port agent reports. That put average seaborne crude flows at 3.44 million barrels a day, down by 3% from 3.55 million barrels in the week ended May 13.

Long-haul voyages remained a feature of the latest data, though the volume of crude making the journey to Asia fell from the previous week. Four tankers that loaded crude at Russia’s western ports in the week showed destinations in India, with another two heading for the Suez Canal and two more on their way to the Mediterranean from the Baltic. That’s down from a combined 14 vessels in the previous week.

Russia exports crude from four main areas: the Baltic Sea in northwest Europe, the Black Sea, the Arctic, and terminals on its Pacific Coast.

The weekly shipment figures can swing depending on the timing of when tankers depart, which is also heavily influenced by the weather at ports — as has been the case for the past several weeks.

Flows of Urals crude from terminals in the Baltic, Russia’s primary outlet, fell in the week to May 20 by 313,000 barrels a day, or 17%, reversing the previous week’s gain. The decrease was partly offset by higher volumes from the Black Sea port of Novorossiysk, where flows rose by 119,000 barrels a day, or 20%.

Exports from Murmansk, which handles crude produced along Russia’s Arctic coastline, also slipped, falling to their lowest level in 11 weeks. Flows were down by 28,000 barrels a day, or 11%.

Meanwhile, shipments from the country’s three eastern terminals on its Pacific Ocean coast rebounded, restoring about half of the previous week’s loss, rising by 105,000 barrels a day, or 13%. There were no shipments of Sokol crude from the Sakhalin-1 project for a second week.

The EU is continuing its efforts to get approval for a package of sanctions, including a phased ban on oil imports from Russia. Hungarian opposition remains the main obstacle and the EU has offered member states as much as 2 billion euros ($2.1 billion) to ease the shock of losing access to Russian oil.

While self-sanctioning of Russian crude by European companies has diverted flows to Asia, so far it is having little impact on the overall level of crude shipments. That may begin to change in the coming weeks, after the new restrictions came into effect on May 15, though there was little evidence of a dramatic slowdown in the immediate aftermath of those curbs coming into force.

Moscow’s revenue from export duty slipped in line with lower flows. At current rates of crude oil export duty, the week’s shipments will have earned the Kremlin about $164 million; that’s $5 million less than the previous week and the lowest weekly figure in eight weeks.

A bigger impact on Moscow’s earnings from crude exports has come from the drop in the level of export duty charged on each barrel shipped overseas as of May 1. Crude oil export duty is set at $49.60 a ton, equivalent to about $6.81 a barrel, in May. That’s down from $61.20 a ton, or $8.30 a barrel in April. Duty rates will fall by another 10% in June, reflecting lower prices obtained for Urals crude over the past month.

The number of cargoes shipped from Russian ports fell by three to 32 in the week to May 20 compared with the previous seven days. Fewer ships departed from ports in the Baltic, while shipments from the Black Sea were stable. In the east, the numbers of tankers leaving Kozmino rose, while no vessels left De Kastri for a second straight week.

Shipments of Sokol crude from the Pacific port of De Kastri have ground to a halt. The last two cargoes on the April program were missed and there was only one loading in the first 20 days of May. Three Russian-owned shuttle tankers that regularly carry the grade are anchored empty off the loading terminal.

The following charts show the destinations of crude cargoes from each of the four export regions. Destinations are based on where vessels signal they are heading at the time of writing, and some will almost certainly change as voyages progress.

The volume of crude on ships loading from the Baltic terminals at Primorsk and Ust-Luga fell back in the week to May 20. The volumes on tankers showing destinations in Asia and the Mediterranean also both fell, with shipments to Asia slipping to a four-week low. Flows to traditional buyers in northwest Europe were stable at their lowest level since late March.

Crude shipments from Russia’s Baltic ports are still going according to plan. All cargoes scheduled to load at Primorsk and Ust-Luga during the week to May 20 were shipped within a day of their planned loading dates.

Six tankers completed loading at Novorossiysk in the Black Sea in the week to May 20, unchanged from the previous two weeks. Larger cargo sizes led to a week-on-week increase in the volume of crude shipped from the port. Shipments to Asia fell to zero for the first time in 12 weeks, with all the tankers remaining in the Black Sea/Mediterranean region.

Two cargoes scheduled from Novorossiysk during the week failed to load. The tanker fixed for one of them moored at the terminal on Sunday, while the other remains anchored off the port.

Two ships loaded from Gazprom Neft’s Umba floating storage facility at Murmansk. One is headed to Omisalj in Croatia and the other to Paradip in India. That is the first delivery to India in seven weeks and only the second since Russian troops invaded Ukraine in late February.

Crude flows from Russia’s three eastern oil terminals picked up during the week to May 20, despite the continued absence of Sokol cargoes from De Kastri.

Eight tankers loaded ESPO crude at Kozmino, one more than during the previous week. That’s still pretty much in line with the program to ship a record 33 cargoes in May.

There were no shipments from De Kastri, which handles Sokol crude from the Sakhalin 1 project. Three Sovcomflot tankers have been anchored empty off the oil terminal since late April, with just one cargo loaded in the first week of May and delivered to Dalian in China. Eight cargoes that should have been shipped since late April, according to a loading program seen by Bloomberg, have been missed.

One cargo of Sakhalin Blend crude was loaded from the terminal at the southern end of the island. It is heading for Japan — the first Russian cargo to head there in five weeks.

The number of tankers heading from Russia’s western export terminals to destinations in Asia fell back in the week to May 20. Four ships are headed to India via the Suez Canal, with another two showing their destinations as Port Said or Suez, both regular signals for ships intending to transit the Suez Canal. One is signaling “for orders” and one is showing a destination of Piraeus in Greece, another common signal from ships heading towards the eastern Mediterranean. 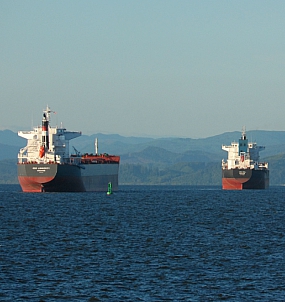 At least one tanker that loaded in earlier weeks is still showing a destination of Gibraltar. Previous ships initially showing that destination have either conducted ship-to-ship transfers off the Spanish north African town of Ceuta, continued on to the Suez Canal, or made deliveries in the Mediterranean region, only changing their destination signal after entering that sea.

There were no observed ship-to-ship transfers of Russian crude in the week to May 20.

The Aframax tanker Nissos Delos remains anchored off the Sri Lankan port of Colombo, where it has been since April 25, but does not appear to have discharged any of its crude. The island nation’s government is seeking funds to pay for crude and products sitting in tankers off its coast, including the cargo of Siberian Light crude held on the Nissos Delos.

Russia expects to receive one trillion rubles in additional oil and gas revenues this year, the finance minister said Friday, adding that part of the windfall will be spent on Moscow’s offensive in Ukraine. “We […]

Don’t Expect OPEC to Keep You Warm This Winter

Skyrocketing prices for natural gas, coal and electricity are putting extra pressure on oil markets, boosting demand as industries and power generators seek to switch to liquid fuels to keep a lid on costs. But […]

Russia’s Lukoil PJSC is retracting its decision to sell its stake in West Qurna-2 field in the south to Chinese companies, according to Iraqi state-run newspaper Al-Sabah. Iraq’s oil ministry has been in talks with the company […]