Russia’s seaborne exports of crude and oil products continued to elude the thrust of Western sanctions during the first half of August exceeding 6 million b/d for the first time since hitting a post-pandemic high in April, according to tanker tracking data.

Russia’s crude exports rose by 140,000 b/d on the month to average 3.36 million b/d from Aug 1-16 to remain above pre-war levels for the fifth month in a row, preliminary data from vessel analytics provider Kpler shows. Oil product exports from Russia also rose for the third consecutive month in the period to average 2.75 million b/d, the highest since Russia’s invasion of Ukraine on Feb 24. 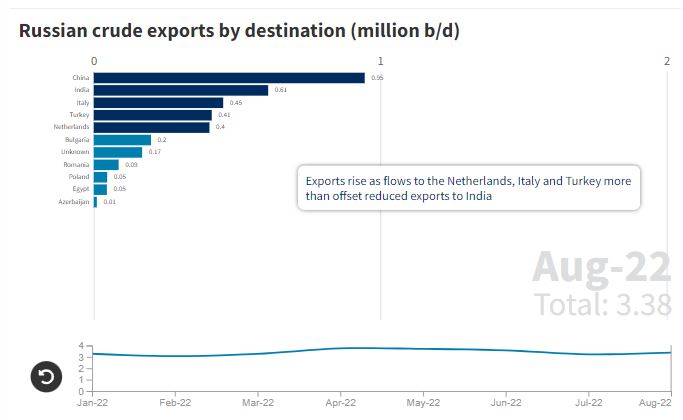 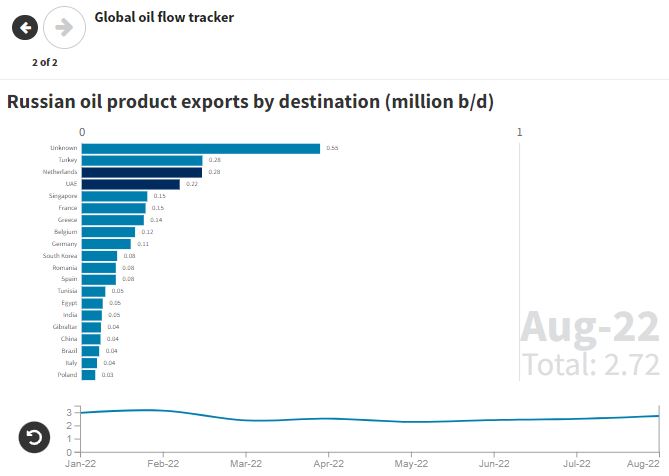 Although refiners in Asia continue to snap up discounted Russian crude, the data shows the pace of Moscow’s crude exports to India slowed to 670,000 b/d in the period, the lowest since exports surged to an all-time record of almost 1 million b/d in April.

Despite flows to China rising slightly on the month, Russian crude exports to China and India — now its biggest customers – slipped to 1.56 million b/d down from 1.74 million b/d in July. By contrast, Russian exports to the Netherlands, Italy, and Turkey all rose sharply in early August, the data shows. The three importers saw flows of Russian crude rose by a combined 400,000 b/d compared to July.

Flows of Russian oil into the Netherlands –home to the Amsterdam-Rotterdam-Antwerp refining hub– are under the spotlight as EU sanctions ban most Russian oil flows to the trade bloc by early next year. Year-end EU curbs are also set to hit the global shipping insurance market, raising uncertainty over tanker accessibility after December.

Lukoil is not currently subject to direct sanctions but the Italian government has considered temporarily nationalizing the ISAB plant, which accounts for a fifth of Italy’s refining capacity.

With the EU’s ban on Russian oil imports and related shipping insurance looming, some 3 million b/d of Russian seaborne crude and products imported by Europe in June/July will require new buyers. Germany and Poland have also pledged to halt about 500,000 b/d of shipments through the northern Druzhba pipeline from Russia.

As a result, S&P Global Platts Analytics forecasts Russian crude and condensate production will fall by 1.2 million b/d between July and January 2023, to 1.5 million b/d below pre-conflict volumes.

“By early 2023, nearly 3.5 million b/d of crude and products still reaching Europe must be redirected elsewhere, while the availability of tankers will be squeezed by Western sanctions, restricting shipping insurance, financing, and other services,” Platts Analytics chief geopolitical advisor Paul Sheldon said in a note. 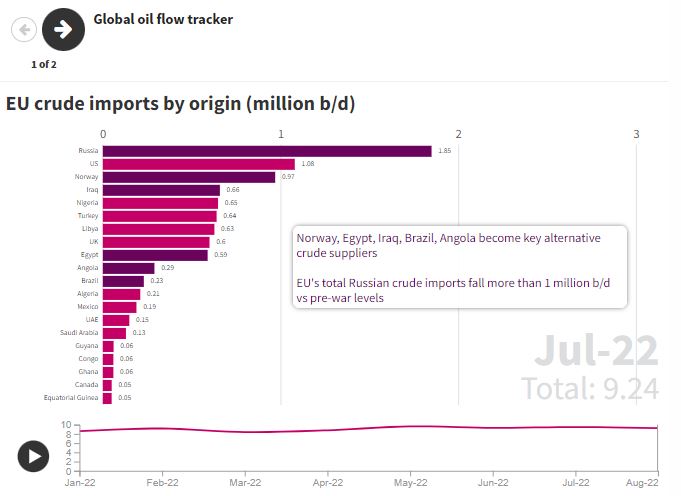 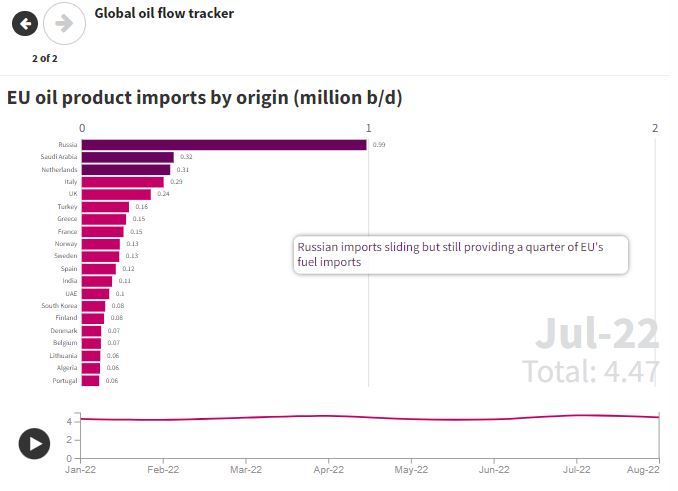 Although the EU’s imports of Russian crude have fallen more than 1 million b/d vs pre-war levels, Russia is still the biggest source of the trade bloc’s shipped crude with more than 1.8 million b/d of flows to the region in early August, the data shows, unchanged on the month. The data confirms that the US, Norway, Egypt, Iraq, Brazil, and Angola have become key alternative crude suppliers to the EU, collectively supplying an additional 1 million b/d extra crude since February.

The tanker data also points to the growth of obscure, potentially grey market trades to allow European buyers to import Russian crude via third countries. Rare crude exports from the UAE’s Fujairah port hub to the EU averaged 150,000 b/d in early August, the data shows, coinciding with equally rare Russian crude flows to the UAE starting in April this year.

On the oil products side, the data shows that the EU has replaced some 500,000 b/d of direct Russian imports with alternatives from the Netherlands, Turkey, and Saudi Arabia since the start of the war.

EU product imports from the ARA refining hub remain around 40% higher than pre-war levels, for example, while the region is sourcing more fuels from Italy and Turkey, both countries where some domestic refiners have been processing more Russian crude.

Outside Europe, flows of oil products likely from re-blended Russian stocks are on the rise.

The UAE’s eastern port of Fujairah is now a key supplier of fuel oil to the US, which is importing record levels from Fujairah recently as Russian fuel oil is diverted from Europe to the Middle East. Prior to February, there were only seven instances when Fujairah sent fuel oil to the US since January 2017, according to Kpler.

Saudi Arabia has also seen its imports of fuel oil from the port hub soar since the war in Ukraine to almost 70,000 b/d in July. Market watchers believe Saudi Arabia is buying up discounted Russian fuel oil to help fuel its power plants in a bid to save on its domestic crude normally used as a direct fuel for power generation.

Oil suffered its third weekly loss on Friday as growing indications of a possible global recession battered the commodity, overshadowing any supply-risk concerns. US benchmark West Texas Intermediate futures landed at $85.11, a 1.9% decline […]

Energy News Beat Publishers Note: It is a good thing for India to voice its concern before Thursday and Friday’s meetings of OPEC. The policies for price manipulation have been tough to enforce, and increased […]