According to the Comptroller’s data, in April, Texas oil producers paid a record $666 million to the state in oil production taxes, the highest amount in history. At $595 million, May collections were almost as high. Similarly, the state’s natural gas producers paid $413 million in natural gas production taxes in May, the highest amount in history. These monthly amounts are remarkable in that they exceed the dollars paid of some entire past years’ revenues.

“Tax revenue generated by robust oil and natural gas activity across Texas continues to be a game-changer for Texans, providing billions of dollars in funding for our state’s public schools and universities, roads, first responders, and essential services,” said Todd Staples, president of the Texas Oil & Gas Association. “The indispensable role this industry plays in Texas’ continued economic successes underscores the importance of policies that encourage responsible development of our natural resources.” 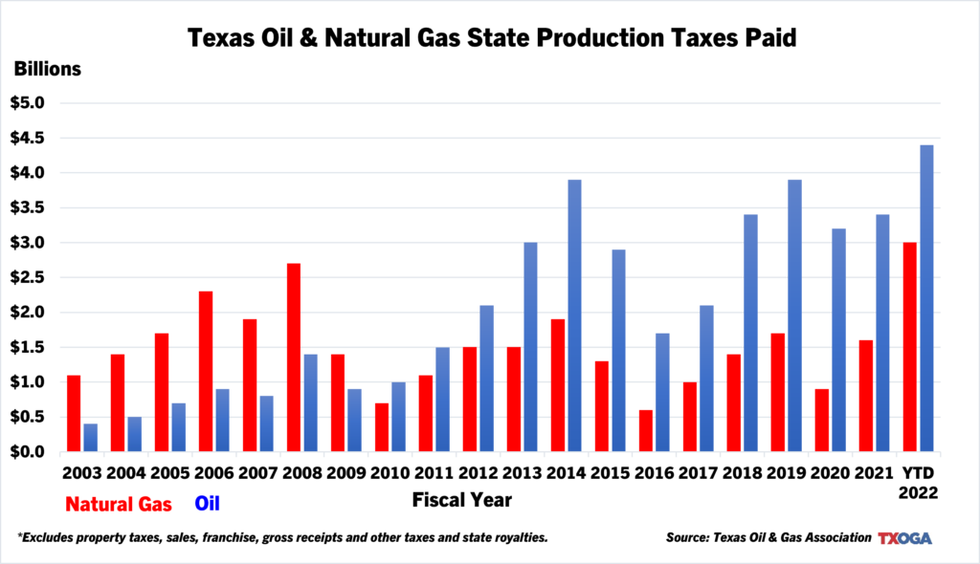 Statistics from the Comptroller’s announcements on tax revenue collected in April and May 2022:

“No one produces the oil and natural gas the world needs in a more environmentally responsible way than American producers, and the lion’s share of that production takes place right here in Texas,” continued Staples.

The resiliency of the industry is also shown in rising employment in the oil and natural gas industry, which has added an average of 3,950 upstream jobs each month this year. Since the low point in employment in September of 2020 in Texas, 33,400 upstream jobs have been added, and job growth months have outnumbered decline months 17 to 2. At 190,400 upstream jobs, April 2022 jobs were up by 26,700, or 16.3%, from April of 2021.

“In Fiscal Year 2021, the oil and natural gas industry directly employed over 422,000 Texans with jobs that pay among the highest wages in Texas, and we should all be encouraged to see this upward trend continue in 2022,” Staples continued. “For every direct job, an additional 2.2 indirect jobs are created elsewhere in the economy, which means you don’t have to be employed by the oil and natural gas industry to benefit from the tremendous economic prosperity and opportunities the industry brings Texas.”

Production taxes are only one of the many taxes that the Texas oil and gas industry pays. The industry also pays billions in property taxes on all assets from producing minerals properties to pipelines to refineries and gas stations. State and local sales taxes also apply to many purchases made by the industry, raising billions more. There are further taxes, including the state’s franchise tax and gross receipts taxes imposed on natural gas utilities and pipelines, and millions of dollars in fees imposed by state government.

“These historic job and tax revenue numbers are a sign of strength and, when coupled with continued rig count increases, are clear indicators of the commitment of the Texas oil and natural gas industry to continue to deliver strength and security. Our industry is stepping up to lead the way in meeting our energy needs, fortifying our national security, and assuring continued environmental progress,” concluded Staples.

While writing this article regarding the Inflation Reduction bill, I was faced with the dilemma of which side is actually correct. News channels seem to flip flop on their beliefs, making it ever harder to […]