As Europe transitions towards green energy, the question of what to do with nuclear power is once more at the center of discussions.

As Statista’s Anna Fleck reports, just this month, the EU Parliament voted in favor of EU rules that would determine investments in nuclear and certain gas projects as sustainable and green. This will likely pass into law, as it would take 20 out of the EU’s 27 member states to reject the move. The new law would come into action from 2023. Data from the International Atomic Energy Agency looks at the use of nuclear energy within the European Union. France is currently leading the bloc, with around 69 percent of the country’s electricity generation based on the energy source. 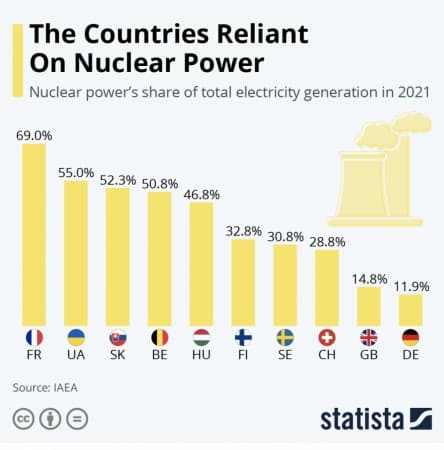 You will find more infographics at Statista

Germany’s nuclear share is the lowest of the list, last year hitting just below 12 percent of total electricity generation.

Related: Biden’s Energy And Climate Bill Could Be Dead In The Water

Its share has gradually fallen ever since the country decided to phase out its reactors in 2000.

Discussions have reignited, however, in light of Russia’s invasion of Ukraine showing the EU’s vulnerability to global market fluctuations.

There are two camps on the topic: On the one hand, supporters argue that nuclear energy is carbon free and could help fill an imminent energy gap, while on the other, critics are concerned about the energy source’s radioactive byproduct being difficult to dispose of.

Germany is preparing to provide a €67 billion ($67 billion) bailout to domestic energy companies that have suffered from the supply shortages produced by the reduction in gas flows from Russia, according to a report […]

Deutsche Bank CEO Christian Sewing warned in a speech at the Handelsblatt Banking Summit in Frankfurt this week that Germany is set to enter a recession. According to reports, Sewing noted that the war in […]